Skip to main content and our Accessibility Statement may be found in the footer of our website.

Cornerstone of the Community for Seven Decades

Because it provides a higher level of care, Desert Regional takes some of the sickest and most critically-injured patients from other hospitals throughout Riverside, San Bernardino, Imperial and San Diego counties as well as parts of Arizona and Nevada.

Desert Regional is also a teaching facility, training the next generation of physicians. Some will remain in the community to help meet the increasing demand for healthcare services resulting from the area’s significant population growth. The hospital began residency programs in various specialties in 2014. The first class of family medicine residents graduated in June 2018.

From Glamorous Hotel to Wartime Hospital 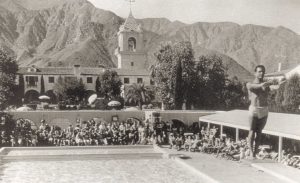 Prior to being the Level II Trauma Center it is today, Desert Regional Medical Center was once the glamorous El Mirador Hotel. The 165-room luxury hotel opened on New Year's Eve in 1928, serving the likes of Hollywood stars and socialites of the 20's and 30's. Frequent visitors included Albert Einstein, Bing Crosby, and Shirley Temple, along with journalists and photographers. The El Mirador Hotel, which roughly translates to "The Watchtower," was known for its 68-foot bell tower. This iconic tower still stands on the hospital grounds today, albeit rebuilt from the original architectural blueprints after it burned down in 1989.

The hotel entered a new era in 1942 when the U.S. joined World War II. The Army bought El Mirador Hotel and subsequently converted it into the 1,600-bed Torney General Hospital, treating wounded soldiers from WWII conflicts around the globe. 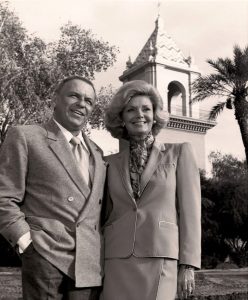 In 1948, the 38-bed Palm Springs Community Hospital would be built on the former El Mirador campus. In 1951, the facility was renamed Desert Hospital, as part of the publicly supported Desert Hospital District. Community philanthropist and famous musician Frank Sinatra was a key donor to the hospital for decades. In 1968, Sinatra announced a $500,000 donation to build what is now the hospital's Sinatra Education Center. At the time it was called the single-largest financial contribution to a hospital made by an individual donor.

Frank Sinatra and his wife, Barbara Sinatra, went on to host many fundraisers for the hospital. Most famously were his Valentine's Day Love-Ins, the first raising $2 million in one night, and his film premiere of Come Blow Your Horn where proceeds benefitted the hospital.

The Sinatra Education Center is still in use today for its original intended purpose, housing a 218-seat auditorium for lectures, multiple classrooms and conference rooms, and a medical library with a dedicated medical librarian to assist physicians and residents. The hospital's north tower wing is also named after Frank Sinatra.

Palm Springs is one of nine desert resort cities that are part of the Coachella Valley, located in Riverside County, California. Nestled at the base of the San Jacinto Mountains, Palm Springs offers an average of 354 days of sunshine a year, beautiful scenery and plentiful recreational opportunities including golf, tennis, hiking, biking and swimming. Joshua Tree National Park is just a short drive away. Conveniently located in Southern California, Palm Springs is also just two hours from the beach and alpine mountain recreation is available right at home at the Palm Springs Aerial Tramway.

With a permanent population of more than 443,000, the greater Palm Springs area offers affordable housing—especially when compared to other areas of Southern California.

For shoppers, there are boutiques and unique offerings along Palm Canyon Drive in Palm Springs and the famed El Paseo Drive in Palm Desert, which hosts Fashion Week each March. The area also includes an indoor mall – the Westfield Shopping Center, as well as old town La Quinta and numerous big box retailers throughout the valley. For those looking for outlet shopping, the Desert Hills Premium Outlets boasts over 100 stores just 20 minutes from Palm Springs.

Visit these websites for more information about the Palm Springs area: