Skip to main content and our Accessibility Statement may be found in the footer of our website.
Back To News 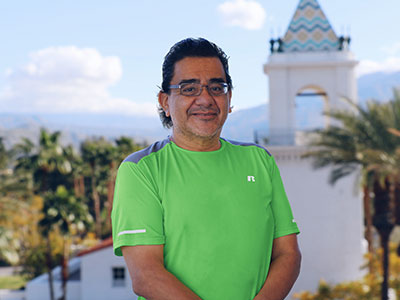 Just a Few Steps
A Patient Testimonial from Rafael Magana

It was just a few steps outside. Barefoot. But that was all it took to send Rafael Magana on a wound care journey that could have cost him his left leg.

In his late fifties and fit, Rafael enjoyed walking and jogging—going to the gym and cycling. It didn’t seem like a simple stroll in the backyard could be so dangerous. “But I should have known better,” he said. Being diabetic, he had a little bit of neuropathy. He could lose feeling in his feet—so when he took that stroll and stepped on something, he couldn’t feel the injury. Before long, a small ulcer developed.

“Like any good Hispanic young boy taught by his ancestors, I tried to cure it myself,” he said. Rafael tried washing it out, flushing it out—even trimming around the wound. It was just the size of a pencil eraser at first. But it started to grow. And as it grew—from a small dot to the size of a quarter to the size of an old half-dollar piece—he became increasingly affected.

“I was sort of delusional,” he said. “You don’t notice the everyday things you’re doing; you lose track.” When his sister finally saw his foot bleeding, she told him he needed to go to the emergency room. That was in early April—about two months after the initial injury.

Rafael agreed, but didn’t expect much: “I thought they’d give me a couple of antibiotics and then ship me out the door.” He had no idea how bad things were. “When they said they’d admit me to the hospital—that’s when I realized the gravity of it.”

His foot was so infected it was even affecting his blood. “I was almost at the point of being borderline sepsis,” he said. Rafael had thought his foot was in a better condition than the reality: “The assumption was that everything was moving—and I still had 75% of my feeling.” But his assumption was wrong.

“They rushed me into surgery that afternoon,” Rafael said. “That’s when the gravity of what I had set in.” That day, he underwent a complex debridement of the lower half of his left foot—straight down to the heel. The surgery helped clean out the damaged and infected tissue—but it was a dramatic sight to see afterward. “At that point the reality set in how serious this was.”

One doctor he saw after the surgery told him that the best thing to do would be to amputate the left leg below the knee. The idea knocked him over. Amputation would mean a dramatic change in his way of life—not just how me moved, but how he lived day-to-day. But that was not the only doctor Rafael saw.

Dr. Jackson Crough had a different plan. “I talked to Dr. Crough and he said, ‘If I didn’t’t know I could save your foot, I would tell you. We are going to save your limb,’” Rafael remembered. “He was that confident—and very reassuring.” Dr. Crough explained how they could regenerate the cells in Rafael’s foot to help new tissue grow back and heal—something Rafael made his Plan A. If that didn’t’t pan out, he’d consider Plan B the amputation: “in order to make Plan A work, I did whatever Dr. Crough said to do.”

Rafael drank more fluids; watched his sugars; took his medications; and cared for the wound itself. He learned how to flush the wound. A home health nurse came to change his dressings three times a week. And he had regular appointments with Desert Care Network’s Amputation Prevention Center at the Advanced Wound Healing Center in Palm Springs.

“It was an awesome staff—each and every one of them,” Rafael said. “Very professional, very approachable and personal. They addressed my personal needs as if I was the only one there.” His interactions with Dr. Crough went well from the start. “He was straightforward, very honest, and matter of fact,” Rafael said. Healing progressed at a breakneck pace.

“The other doctor who had looked at the wound before I left the hospital couldn’t’t believe the healing in just a few weeks,” Rafael said. During this time he kept weight off of his heel, first with a walker and then for a short time an electric scooter. The goal was to give his foot all of the right conditions to heal.

By the end of May, the wound had shrunk to the size of a dime—without any depth to it, just a little circumference. “I went from 10 mm to 8 mm to 6 mm to 4 mm and then it healed up in Mid-June,” Rafael said. “I was ecstatic. I was speechless. And I was very, very, very grateful for the doctor and the staff and that office.”